Greeting from the executive director 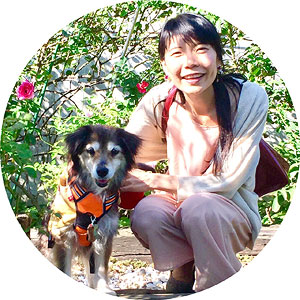 Hello and welcome to Mother’s Tree Japan.
I am Tomomi Tsubonoya deputy president and general director of this organization. My strong motivation for this project is based on my childhood experiences when I was living in Hong Kong and UK from age 6 to 14 years old. In Hong Kong, I felt isolated and sad because some of the people regard me as a child from an enemy country.
In the UK I was discriminated by the students because I was Asian.

I remember that my mother had a hard time raising children in those foreign countries in which the food, clothes, way of communication , the medical system (including the way of understanding of sickness) were so different from Japanese ones.
Especially, I vividly remember my hospitalization experience when I had appendix surgery in a London hospital when I was 14 years old. It was so painful, and I felt anxious before and after the surgery.

In addition, my poor English was helpless to express my symptoms and feelings. Just after the surgery, I got a high fever and the treatment in the western hospital was quite different from the Japanese one.
My family was confused. furthermore, it was quite challenging to explain the Japanese way to the doctor.

On the other hand, there were many people who tried to understand my situation despite the fact that they couldn’t speak Japanese at all. They were so kind to me and their caring eyes and attentive attitudes comforted me so. That was an unforgettable experience which also led me to this project.

I came back to Japan , finished my studies, and worked as a nursery teacher for 10 years, mainly taking care of babies and supporting their young mothers. After that, I became a therapist for women who are in their maternity and post natal terms , giving them Lomilomi massage, Thai traditional thermotherapy as well as accompanying them with their very first step in raising children.
I have been happily doing this for 15 years.
Through those activities I had occasions to met plenty of new mothers not only Japanese but also foreign ones. Every encounter widened my world and all the relationships have been heartwarming. Some of the friendships have made still continue and we have become like a real family.

One day I noticed a misunderstanding in the conversation between two ladies in a cafe (described in [About us]) and that pushed me to start Mother’s Tree Japan. It has been 33 years since I came back to Japan, but maybe because I spent most of my childhood in foreign countries, I sometimes feel like a foreigner in Japan.

That is one of the reason why I fundamentally believe that there is no such a thing as the supporter’s role and that of the person being supported.
It should be an equal relationship between two people, who respect each other,help each other without jugement of each other’s nationality and cultural background.

Just a lovely mother and a child in front of me. I wish I can accompany pregnant and postnatal mothers and encourage them to start raising their children in Japan.
I want them to feel at ease , confident, and have a high self-esteem.
Mother’s Tree Japan welcome all mothers.If you sympathize with our thought, please join and support us.